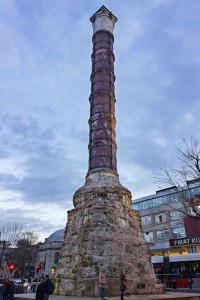 Probably my favorite thing about Istanbul is the historic surroundings. You can’t swing a street cat without hitting something several centuries old (not that you would). My fascination with all things Byzantine is well-fed in Istanbul, which, having been the center of the Roman/Eastern Roman/Greek/Byzantine Empire for more than a millenium, has more than its fair share of Byzantine wonders.

In this series of posts, I will catalog and explain these sights. It is my goal to find the remnants of Byzantine Constantinople in Turkish Istanbul. There is much left to find, but not all of it is out in the open.

Today, I will write about one of the oldest Byzantine sites in the city, the Column of Constantine. In fact, it would be hardly proper to call anything about the empire “Byzantine” when this column was built in 330. Its purpose was the commemoration of the founding of Nova Roma, the new Rome, and its elevation to the new capital of the Roman Empire, not yet split into eastern and western parts and still thoroughly Roman in character. Still, the raising of this column marked a new era in the Roman Empire with the shifting of power to the East, and as such is very significant to the Byzantinist.

What is the Column of Constantine?

The Column of Constantine is a Roman monumental column of the style often used to commemorate triumphs. Several other famous columns exist across the former Roman world, including Trajan’s Column in Rome and Pompey’s Pillar in Alexandria. Quite often these columns were hollow to allow for inner staircases, as in Trajan’s Column, but they were also commonly made of solid cylindrical blocks of stone, as in Constantine’s Column.

Constantine’s Column is made out of porphyry, a purple marble of some significance to the later Romans. In the Great Palace of Constantinople, there was a chamber made, or perhaps veneered, entirely of porphyry, in which empresses would bear children. Children borne to a reigning emperor and his legitimate wife within the porphyry chamber were given the appellation “Porphyrogennetos” or “Porphyreogennete,” meaning “born in the purple.” The most famous example of this was Constantine VII, who has kept the appellation through history, although the underrated Anna Komnene was a Porphyrogennete as well.

The column itself has looked significantly different over the various stages of its life. Initially, it was 50 meters tall and topped by a very large statue of Constantine made to look like Apollo. When the column was dedicated, there were both Christian and pagan ceremonies, and despite Constantine’s at least-latent Christianity, the Roman Empire was still well within its emperor-worship phase. In 1106, a large storm blew the statute down, along with the top three porphyry drums. It took more than forty years to be repaired, under the reign on Manuel I, who replaced the statue with a cross, reflecting the very thoroughly Christian nature of the medieval empire. He also added an inscription to let the world know that it was he who repaired the damage. (This was quite common in the Roman world – cf. the Pantheon in Rome: “M. Agrippa Fecit.”) He did not, however, replace the top three drums. The column is therefore 35 meters tall, down from its original 50.

The inscription at the top of the column. Please excuse the slightly fuzzy result; I took this picture at dusk and with a zoom of 300 mm. My only regret from my months in Istanbul is that I wasn’t a better photographer when I lived there.

In the aftermath of the madness that was the Fourth Crusade, the bronze wreaths that held the drums together were stolen by the looting “Latins,” and were probably melted down or taken as trophies long since vanished. In their place, the drums are held together by iron hoops. The Turkish name for the column is Çemberlitaş, or “the hooped stone [column].” The present metal brackets were added in 1972.

In 1779, a fire destroyed the neighborhood around the column, and though the column itself survived, it was covered in scorch marks giving it its current nickname, “the Burnt Column.” The famous historian Edward Gibbon called it the “burnt pillar.” Shortly after the fire, the Sultan, Abdul Hamid I, added the masonry base that you see today. Originally, the base was quite a bit smaller and thinner, and the original ground is perhaps two meters or more under the present Çemberlitaş Square.

The huge masonry base of the column, with unsuspecting Turkish family for scale.

Where is the column, then and now?

The column is now in the heart of the historic peninsula, or the Old City. It is a stone’s throw away from the major tourist sites of Sultanahmet Camii, the Hagia Sophia, and Topkapi Palace. It is a bit difficult to envision, then, that the column was originally built outside of the city walls.

There have been several sets of walls surrounding Byzantion/Constantinople. The original Byzantion walls surround a quite small area even in comparison to the historic peninsula as it is today. These were razed by Septimius Severus around the early 200s, who then replaced them with the “Severan Walls” farther out. It was directly outside of the main gate of these Severan Walls where the column was first erected.

About a century after the Severan Walls, in the early 300s, Constantine the Great built his own set of walls and thoroughly remade the city as New Rome. The new walls were perhaps two kilometers to the west of the Severan Walls, vastly enlarging a city that was, in another century or so, to be vastly enlarged again by the construction of the Theodosian Walls under Theodosius II. In any case, the column was now quite inside the city, in the very center of what became the Forum of Constantine, now Çemberlitaş Square.

This column, therefore, is a significant milestone on the way from Rome proper to Byzantium generally. Byzantium never completely gave up its Roman roots. The people called themselves Romans into the 15th century – ironically in the Greek language: “Romaioi” – and they considered themselves the “modern” font of Roman law and culture, despite the shifting of power and influence to Constantinople. One could make the argument that it all began here.

Here is a small slideshow gallery of the column, including how it looks when you’re directly under it. It’s quite impressive, really. 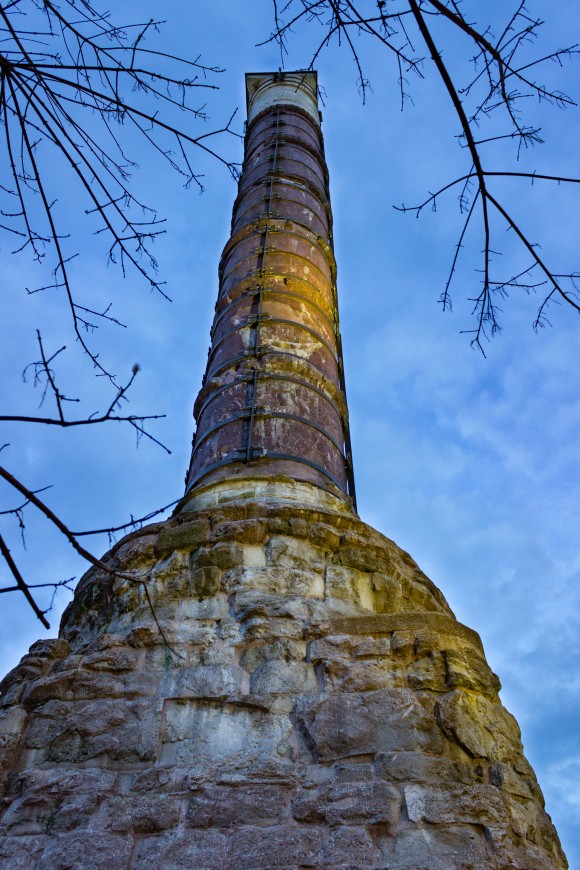 N.b., this was originally posted on http://www.noticketback.com.

1 thought on “Byzantine Istanbul 1: The Column of Constantine”