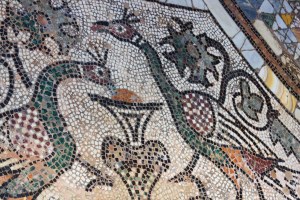 As reported by Haaretz, archaeologists have uncovered what appears to be a major Byzantine-era monastery during pre-construction excavations at Beit Shemesh, Israel.

In an exciting development, the excavation includes “extraordinary mosaics” covering the floors of the church. These mosaics include some figures and motifs that seem to be very unique to the area.

Archaeologists said they found a major early Christian church, based on the discovery of extraordinary mosaics, crucifixes and iconic Christian architecture at a site in the central Israeli town of Beit Shemesh.

Based on the ceramic finds and coinage, the church was probably built in the 4th century C.E., and survived – even expanding, it seems, into a whole monastery complex – for about 300 years, through to the 7th century.

The monastery was used for 300 years, but apparently abandoned in the 7th century. Almost certainly its decline was directly due to the Muslim conquest of the area, roughly contemporaneous with its decline. However, it is suggested that the decline was not due to persecution per se by the Islamic conquerors, but rather by the monastery’s removal from the Byzantine sphere of economic influence and – critically – the financial support of the empire.

Before Constantine, the early Christians had been second-class citizens at best and thrown to lions at worst. But after him, Christians had imperial status – and thus church evidently received imperial Roman funding, hence the purchases of costly marble from the imperial quarries, and unique mosaics. The problem would have begun when the onset of the early Islamic period in the Holy Land. The Muslim invaders did not kick everybody out, and might well have left the church to soldier on, as it were. But the region was severed from the Byzantine economic circle.

“It wasn’t necessarily conquest by the sword,” says [Benyamin] Storchan [of the Israeli Antiquities Authority]. “We have no evidence for drastic abandonment. But the church collapsed and was converted into agriculture land in the early Islamic period.

Religious-oriented finds include many crosses, a piece of a chancel screen, and incense burners. All of these seem quite normal to dig up in a monastery. What stands out, however, is the aforementioned mosaics.

The mosaics include depictions of fruit trees which, according to Storchan, have no known parallel in this part of the world.

The mosaic floor also includes depictions of birds that immediately reminded me of the floor of the Church of Santa Maria e San Donato in Murano, Italy, which was originally build in the 7th century, right around the time this monastery was being abandoned. (It has been subsequently rebuilt.) You’ll have to click through to the article to see the (less-ornate) birds uncovered in Israel, since I don’t own the rights to any of those photos, but in the meantime, enjoy some photos, that I did take, of the lovely floor of Santa Maria e San Donato: 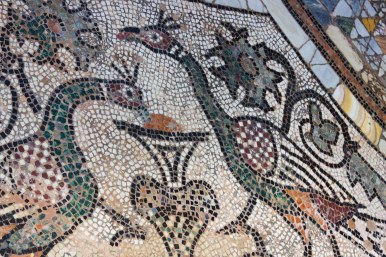