END_OF_DOCUMENT_TOKEN_TO_BE_REPLACED

On the Greek side of Cyprus’s divided capital, Nicosia, there is a Byzantine Museum within the palace complex of the archbishop (see here), containing art works from the 9th century to the 19th.

I figured that my loyal reader(s) might want to see some selections of what’s in there as of 2016.

Interestingly, many of the works in here have come from churches in the northeastern part of the country, which, depending on whom you ask, is either the Turkish Republic of Northern Cyprus or the Turkish-occupied section of Cyprus. Sadly, these were largely looted and stripped from these churches and sold, often abroad, before being repatriated.

As it would make little sense to send them back to their places of provenance, they are displayed here. In one particular case, the veneer of a small, looted chapel is almost completely reconstructed onto specially-shaped walls of the museum.

END_OF_DOCUMENT_TOKEN_TO_BE_REPLACED

In the northern reaches of Greek Cyprus, a stone’s throw from the UN-imposed “Green Line,” separating Greek Cyprus from Turkish Cyprus, there is a village called Nikitari. About three kilometers south of Nikitari, the intrepid traveler – who has braved mountainous terrain, narrow roads, and a steering wheel on the wrong side of the car – will find the Church of Panagia Phorviotissa. And the traveler will be rewarded for his perils.

The church is also called Panagia tis Asinou, which derives from the name of the ancient village founded nearby by settlers from Asine, a city in Argolis named in Homer as among the possessions of the formidable Diomedes. Somewhere over the years, Asine morphed into Asinou.

This church belonged to a monastery since fallen into disuse and then complete ruin: the monastery “of the Phorvia [or Phorbia],” which is probably derived either from a wild plant called “ephorbium” or from “phorbe,” or pasture. Many appellations of Mary in Cyprus derive from the natural world. If Panagia Phorviotissa tis Asinou is too much of a mouthful for you, try Our Lady of the Pasture. Just don’t expect to find that on Google Maps. 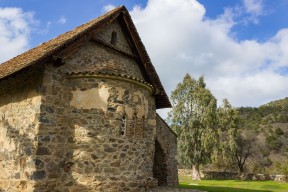 END_OF_DOCUMENT_TOKEN_TO_BE_REPLACED

As reported by Haaretz, archaeologists have uncovered what appears to be a major Byzantine-era monastery during pre-construction excavations at Beit Shemesh, Israel.

In an exciting development, the excavation includes “extraordinary mosaics” covering the floors of the church. These mosaics include some figures and motifs that seem to be very unique to the area.

Archaeologists said they found a major early Christian church, based on the discovery of extraordinary mosaics, crucifixes and iconic Christian architecture at a site in the central Israeli town of Beit Shemesh.

Based on the ceramic finds and coinage, the church was probably built in the 4th century C.E., and survived – even expanding, it seems, into a whole monastery complex – for about 300 years, through to the 7th century.

The monastery was used for 300 years, but apparently abandoned in the 7th century. Almost certainly its decline was directly due to the Muslim conquest of the area, roughly contemporaneous with its decline. However, it is suggested that the decline was not due to persecution per se by the Islamic conquerors, but rather by the monastery’s removal from the Byzantine sphere of economic influence and – critically – the financial support of the empire.

END_OF_DOCUMENT_TOKEN_TO_BE_REPLACED

Probably my favorite thing about Istanbul is the historic surroundings. You can’t swing a street cat without hitting something several centuries old (not that you would). My fascination with all things Byzantine is well-fed in Istanbul, which, having been the center of the Roman/Eastern Roman/Greek/Byzantine Empire for more than a millenium, has more than its fair share of Byzantine wonders.

In this series of posts, I will catalog and explain these sights. It is my goal to find the remnants of Byzantine Constantinople in Turkish Istanbul. There is much left to find, but not all of it is out in the open.

Today, I will write about one of the oldest Byzantine sites in the city, the Column of Constantine. In fact, it would be hardly proper to call anything about the empire “Byzantine” when this column was built in 330. Its purpose was the commemoration of the founding of Nova Roma, the new Rome, and its elevation to the new capital of the Roman Empire, not yet split into eastern and western parts and still thoroughly Roman in character. Still, the raising of this column marked a new era in the Roman Empire with the shifting of power to the East, and as such is very significant to the Byzantinist.